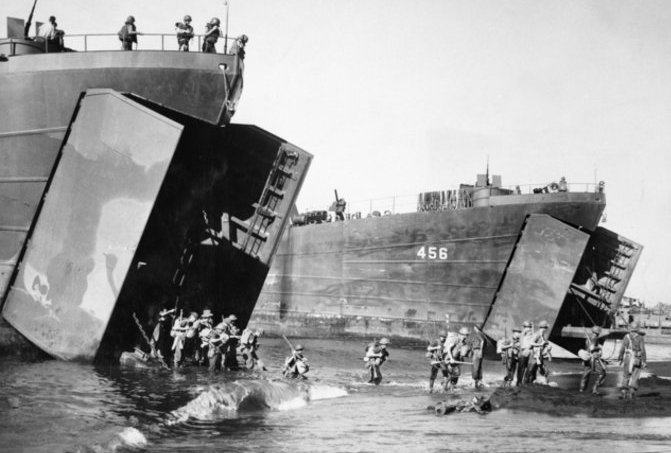 Text
1 of 7
Australian units began moving towards Papua’s north coast in July 1942, but the Japanese secured footholds there first, and began to build up forces for an advance over the Owen Stanley mountain range to Port Moresby. The ensuing battles along its only practicable passage, the Kokoda Trail, were small in scale, but a dreadful experience for every participant. Amid dense rainforest, men struggled for footholds, scrambling through deep mud on near-vertical tracks, bent under crippling weights of equipment and supplies; rations arrived erratically and rain almost daily; disease and insects intensified misery.
Image 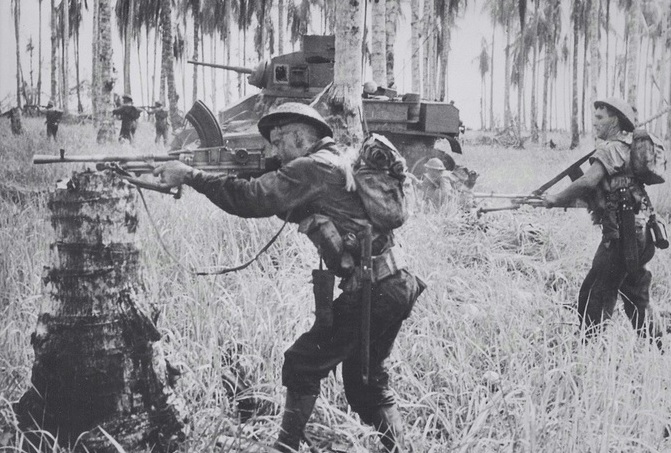 Text
2 of 7
Ultra decrypts revealed a Japanese plan to land at Milne Bay, on the southeastern tip of the island. An Australian brigade was hastily shipped there and deployed. When the Japanese attempted a night landing, they met fierce resistance, and their survivors were evacuated.
Image

Text
3 of 7
The local Japanese commander was ordered to pull back to the north shore of Papua. The Australians found themselves once more struggling up the Kokoda Trail and across the Owen Stanleys, this time pressing a retreating enemy in conditions no less appalling than during the earlier march.
Image 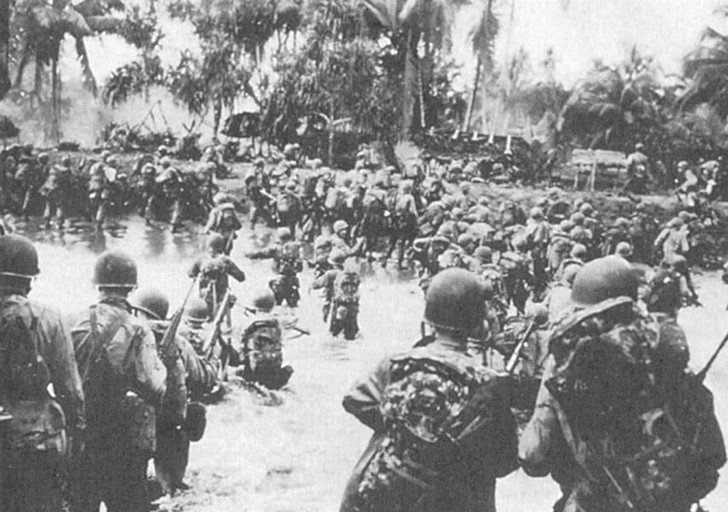 Text
4 of 7
General Douglas MacArthur launched coastal landings by two US regiments, to take Buna. The green Americans, shocked by their first encounter with the combat environment of Papua, performed poorly. Meanwhile, the Australians were exhausted by their efforts on the Kokoda Trail. Thousands of soldiers on both sides were weakened by malaria. But Buna was finally taken at the beginning of January 1943, and residual enemy forces in the area were mopped up three weeks later.
Image 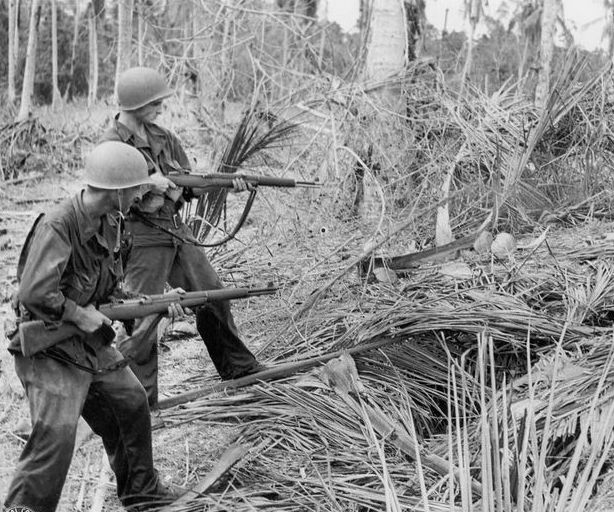 Text
5 of 7
Hard fighting persisted throughout 1943, the battlefields slowly shifting northwards up the huge island. The Japanese, defeated on Guadalcanal, exerted themselves to their utmost to hold a line in New Guinea, feeding in reinforcements. But in March they suffered a crippling blow, during the Battle of the Bismarck Sea. George Kenney’s Fifth Air Force, alerted by Ultra, launched a succession of attacks on a Japanese convoy which sank eight transports and four escorting destroyers en route from Rabaul, destroying most of a division intended for Papua New Guinea.
Image 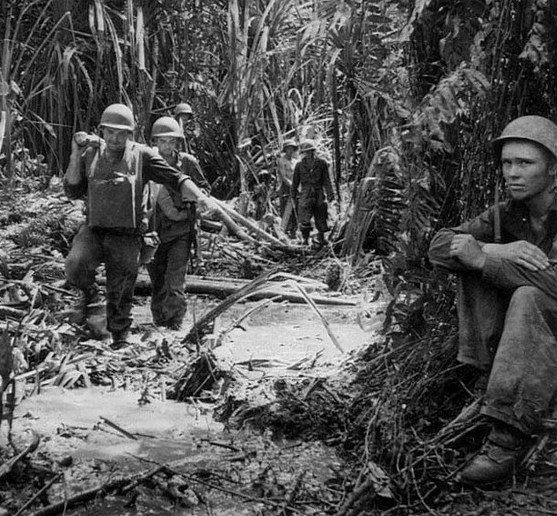 Text
6 of 7
A decisive breakthrough came when Kenney secretly constructed a forward airstrip from which his fighters could strike at the main enemy air bases at Wewak. This they did to devastating effect in August 1943, almost destroying Japanese air power in the region. Thereafter, a force that eventually comprised one US and five Australian divisions launched a major offensive. By September 1943, the major enemy strongholds had been overrun, and 8,000 Japanese survivors were straggling away northwards. The Huon peninsula was cleared in December, and Allied dominance of the campaign became explicit.
Image 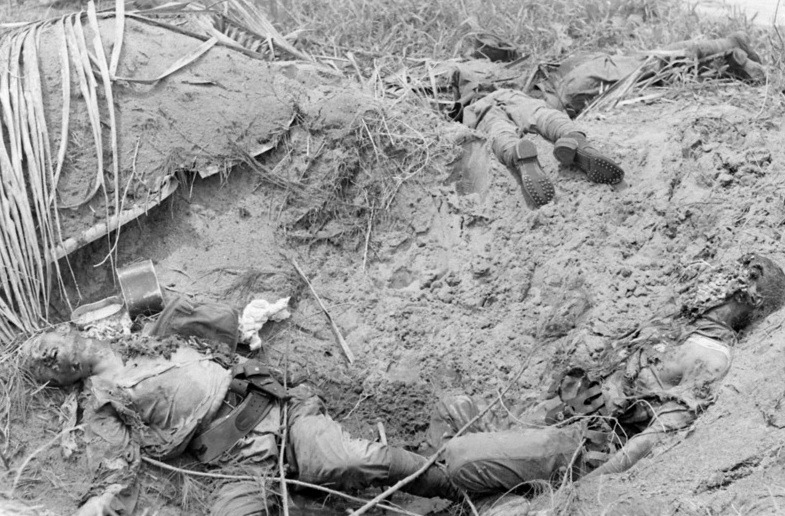 Text
7 of 7
Ultra revealed the location of the remaining Japanese concentrations, enabling MacArthur to launch a dramatic operation to bypass them and cut off their escape by landing at Hollandia in Dutch New Guinea in April 1944. Fighting on the island persisted until the end of the war, Australians providing the main Allied effort. Some 13,500 Japanese emerged from the jungle to surrender there in August 1945.
Image

The next phase of the Pacific campaign was driven by expediency and characterized by improvisation. The US, committed to ‘Germany first’, planned to dispatch most of its available troop strength to fight in North Africa. General Douglas MacArthur, in Australia, lacked men to launch the assault on Rabaul which he favored. Instead, Australian troops, slowly reinforced by Americans, were committed to frustrate Japanese designs on the vast jungle island of Papua New Guinea. Separated from the northern tip of Australia by only two hundred miles of sea, this became the scene of one of the grimmest struggles of the war. 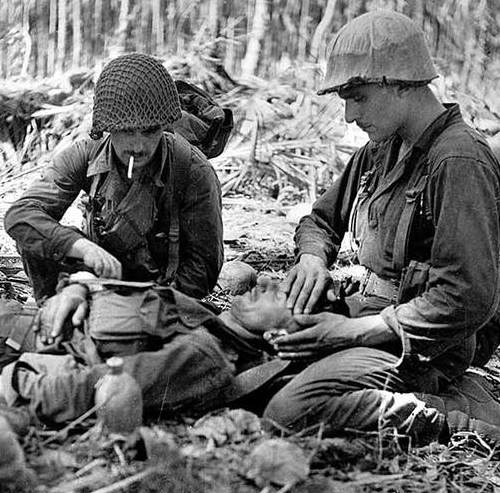 Text
1 of 3
Conflict in a hostile natural environment, where amenities and comforts were wholly absent, imposed greater miseries than fighting in North Africa or northwest Europe. But the experience of combat for months on end, prey to fear, chronic exhaustion and discomfort, loss of comrades, separation from domestic life and loved ones, bore down upon every front-line fighter, wherever he was.
Image 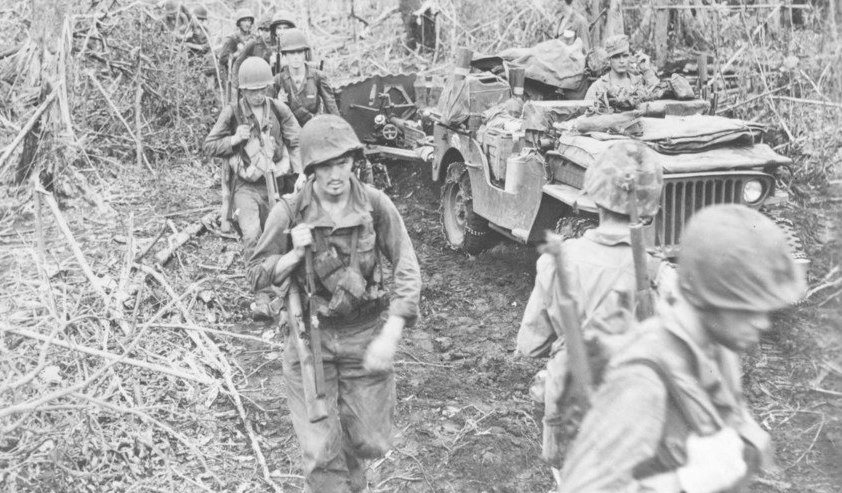 Text
2 of 3
With little to show for their commitments in Asia, US military leaders chose to fight Japan where they saw some chance of offensive action. The initiation of South Pacific offensive operations rested on a level of Allied military strength that encouraged caution. In the Southwest Pacific, MacArthur had only two untested American divisions, two Australian divisions, and an Allied air force of 500 aircraft. The Australian-American naval forces had no greater power than the ground and air forces until reinforced by the Pacific Fleet, based in Hawaii and California. The South Pacific theater had one marine division available.
Image

Text
3 of 3
MacArthur recognized that Australia was the Pacific War’s England: an island bastion from which to mount expeditions against the Malay barrier islands all the way to the Philippines. He needed Australian air and ground units to supplement his own forces, and he depended on the enthusiastic commitment of home-front civilians for logistical support. Although he gave its generals no special role, MacArthur understood Australia’s ability to keep a substantial part of the Commonwealth war effort focused on the Pacific. He also often used Australian diplomatic channels to evade the US military chain of command.
Image 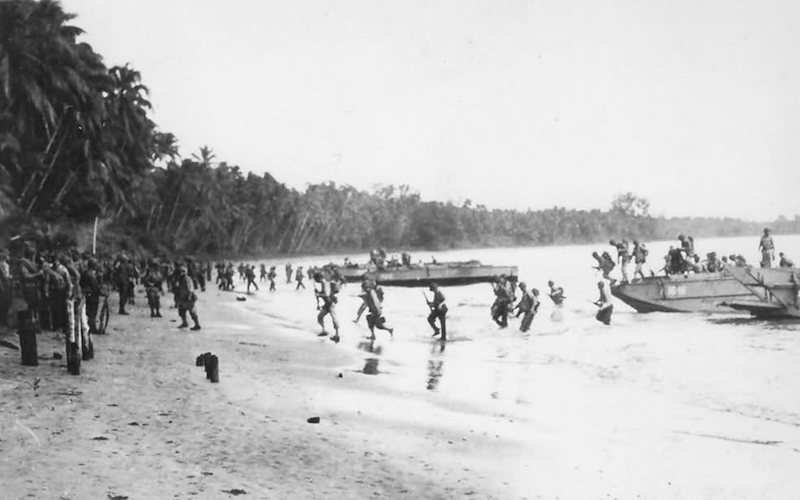 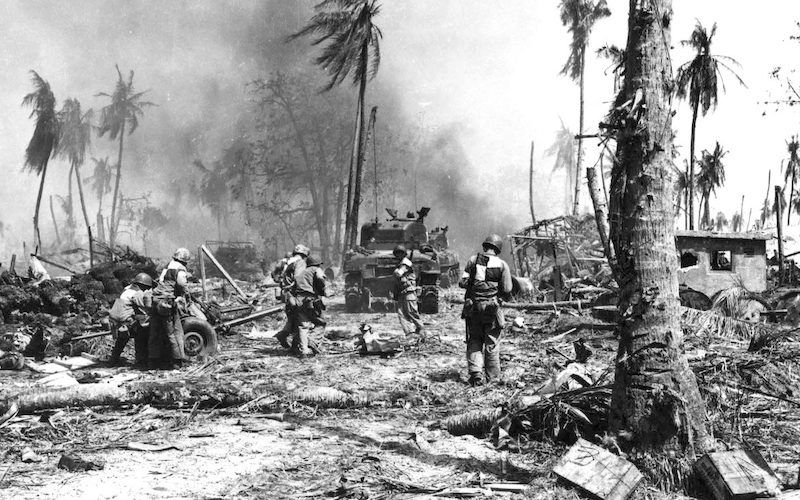 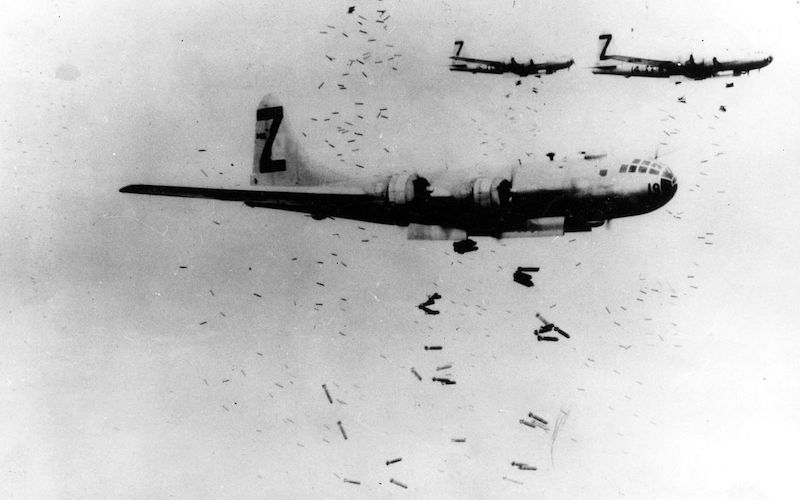