Close
In the begging of 1945 the Russians staged a major offensive, known as the Vistula-Oder offensive. During this operation the Red Army manged to, once again, break the German lines and enter Germany. Afterwards the Russians would continue sweeping across Germany, with the ultimate goal in sight: Berlin.
The Vistula-Oder offensive was a Red Army offensive on the Eastern Front of World War 2. During this offensive the Soviets captured the Polish capital, Warsaw from German hands. The Red Army advanced 480 km from the river Vistula to the river Oder, deep into German territory. The Russians stopped the offensive after two weeks, in order to regroup, only 70 km from Berlin. 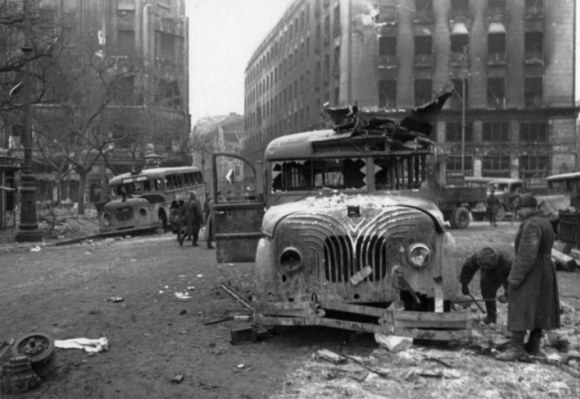 Text
1 of 2
The Soviet Union had been building up its forces on the central portion of the Eastern Front during the time when the Germans were using up their reserves of manpower and equipment elsewhere, first in the offensives in the West and thereafter in futile efforts to relieve the siege of Budapest.
Image 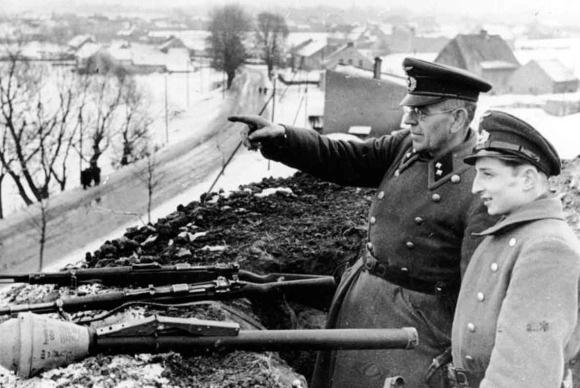 Text
2 of 2
For all the advances made against the Germans in the west between D-Day and the crossing of the Rhine in March 1945 it was on the Eastern Front that the war against Germany was won.
Image

The major emphasis of Soviet military planning for their offensive was on the Central front. They were looking toward a crushing of the German armies from East Prussia to the Carpathians with a rapid follow-up drive to Berlin which was inside the occupation zone allocated to the Soviet Union. The Soviet plan contemplated accomplishing this victory drive to the Elbe river in a first phase of fifteen days. The major thrust would be out of the bridgeheads over the Vistula south of Warsaw. There was a secondary push out of the bridgeheads over the Narev river north of Warsaw. 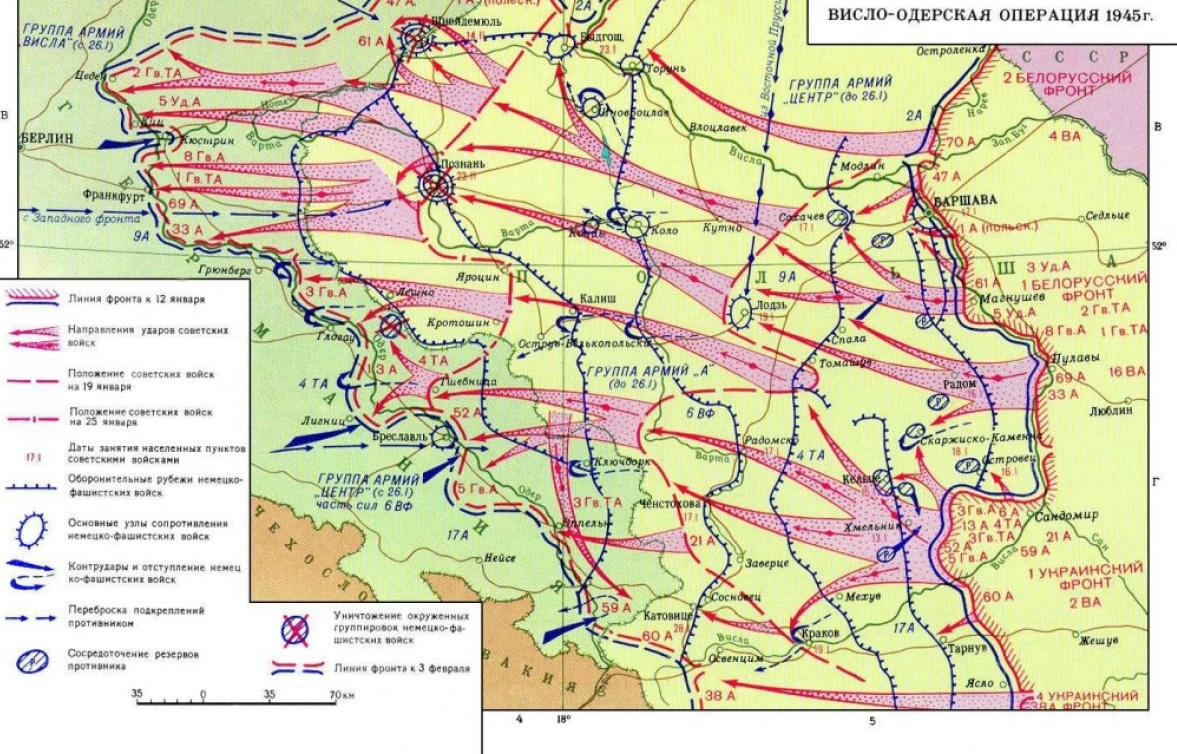 Text
1 of 5
The southern offensive by First Belorussian and First Ukrainian Fronts would drive through southern Poland into the key German industrial area of Silesia. In the north the Second and Third Belorussian Fronts would isolate the German troops in the area around East Prussia by driving to the Baltic Sea behind them and subsequently crushing the cut-off remnants.
Image 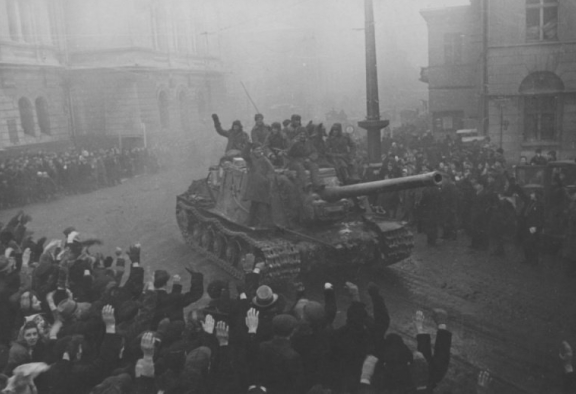 Text
2 of 5
Soviet forces numbered just under 4 million men, 9,800 tanks, and over 40,000 artillery tubes and heavy mortars. The weight of the offensive would lie in the south and center in Konev’s and Zhukov’s forces. There, Soviet superiority was five-to-one in troops, five to- one in armor, and seven-to-one in artillery. Moreover, the Soviets possessed vast fleets of Lend-Lease trucks which ensured logistical support for deep operations.
Image 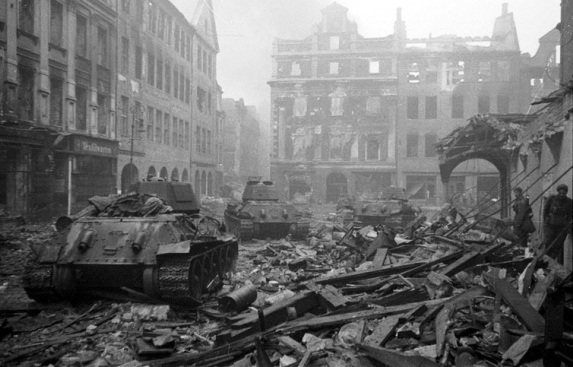 Text
3 of 5
The major thrust of the offensive came from Warsaw to the Carpathians. It aimed to capture Silesia, with its considerable industrial strength. The two fronts in the north were to take out German forces defending East Prussia and cover the advance to the Oder.
Image 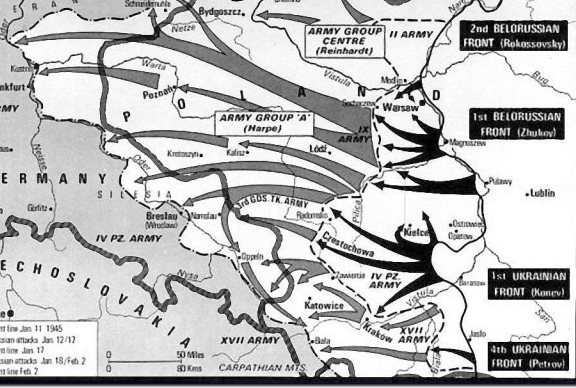 Text
4 of 5
It was assumed that Soviet superiority in manpower, artillery, tanks and mobility would break open the relatively thin crust of German defenders quickly. Mobile Red Army spearheads could then strike deep into the rear of an enemy without substantial reserves. In a second phase of thirty days, which was to follow the first without a pause, the Red Army command would send the southern forces, that is the First Belorussian and First Ukrainian Fronts, straight forward through Berlin and to the Elbe river. The assumption was that a drive of about six weeks would end the war in Europe in February or March and release forces for a campaign into Manchuria against Japan.
Image 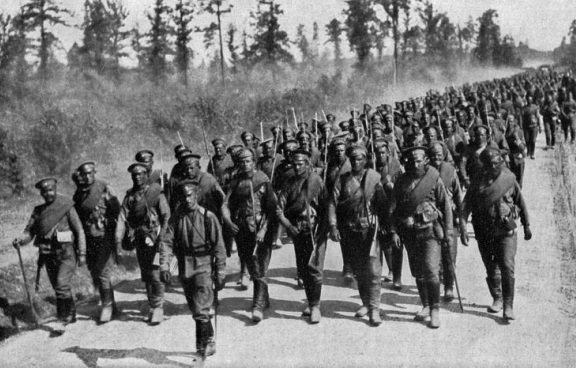 Text
5 of 5
The offensive was moved up a week, in part in response to requests from the Western Allies to relieve pressure. Months of quiet on the main sector of the front in the East had enabled the Germans to concentrate elsewhere. The early attack had the advantage of surprising many of the German headquarters, which had expected the Red Army to await better weather.
Image 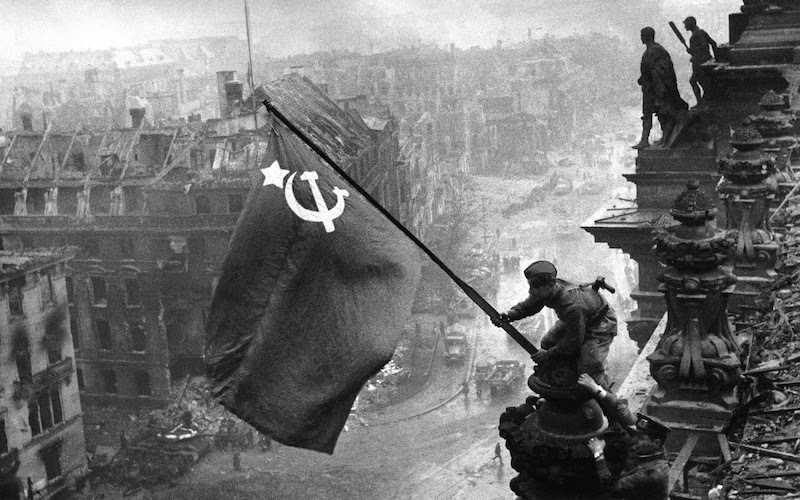 The Battle of Berlin was the final major Soviet offensive on the European front of World War 2. Before the end of the battle, Hitler and a number of his entourage committed suicide. Although the city surrendered, fighting on the outskirts of the city continued for six more days. Germany surrendered unconditionally on 8 May 1945, thus bringing the end of the war in Europe.