Close
During the battle of the Philippine Sea the US Navy inflicted a devastating defeat on the Imperial Japanese Navy. The battle was the largest carrier to carrier battle in history and eliminated Japan's capabilities to conduct future large scale operations. The aerial part of the battle was referred to as the Great Marianas Turkey Shoot by American pilots because of the devastating losses that they inflicted on the Japanese planes.
The Battle of the Philippines Sea was a major naval engagement on the Pacific Front of the Second World War between the US and Japanese navies. The battle took place during the US invasion of the Mariana Islands. The US forces inflicted a severe defeat on the Japanese navy from which it could never again recover. The aerial part of the battle was named by US pilots the ‘Great Marianas Turkey Shoot’ because of the severe disproportion of losses between the Japanese and US forces. 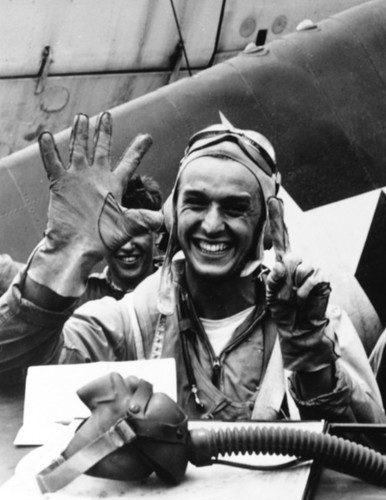 Text
1 of 5
By the summer of 1944 the Americans held the strategic initiative in the Pacific War. Without any source of intelligence on US planning, the Japanese were reduced to guessing where the next blow might fall. The target chosen by the Americans in June 1944 was the Mariana Islands, which would provide bases for bomber aircraft within range of Japan. Admiral Raymond Spruance sent Task Force 58 under Vice Admiral Marc Mitscher to support landings on Saipan with bombardment by carrier aircraft and naval guns.
Image 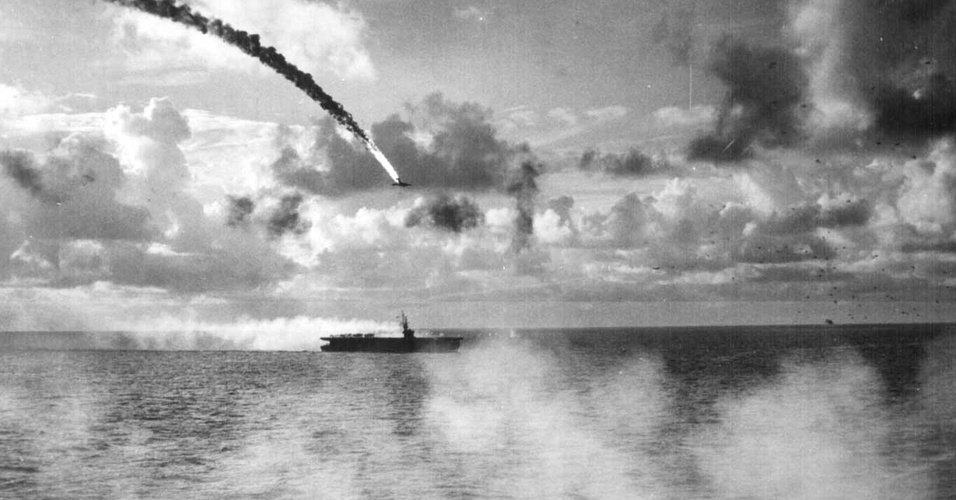 Text
2 of 5
The Japanese carrier pilots were new and inexperienced; they were shot down literally by the hundreds by far more experienced and better controlled American pilots in what came to be called ‘The Great Marianas Turkey Shoot’. Most of those not downed by American planes were brought down by the concentrated anti-aircraft fire of the battleships.
Image 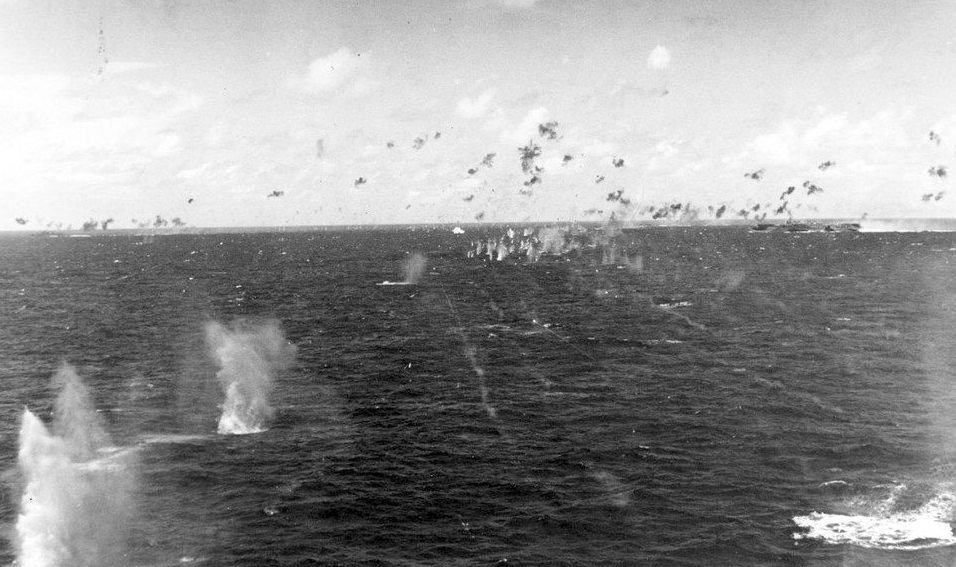 Text
3 of 5
American submarines had sunk several of the Japanese destroyers before the battle was joined, and sent to the bottom two of the large carriers; one, the Shokaku, had been at the Pearl Harbor raid, the other, the new Taisho, blew up when the fumes of the volatile Borneo oil exploded inside the portion of the ship sealed off after a torpedo hit.
Image 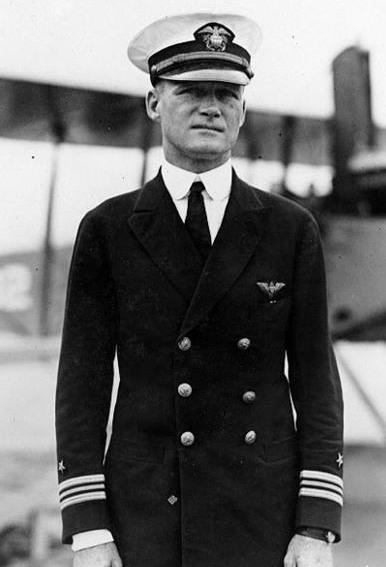 Text
4 of 5
On the afternoon of the following day, Admiral Raymond Spruance located what was left of Admiral Jisaburō Ozawa's fleet and sent his own planes after it, sinking one carrier and damaging two more. Many of the returning American planes had to ditch as they ran out of fuel in the dark.
Image

Text
5 of 5
The Battle of the Philippine Sea, as it came to be known, was a major American victory in which the Japanese navy lost enormously in ships and even more in planes and pilots it could not replace, while United States losses were very low. The victory in the battle, furthermore, made it impossible for the Japanese to cope with General Douglas MacArthur's advance on New Guinea.
Image

The American ability to deploy carriers both in the southwest and central Pacific reflected the extent to which superior American resources, and their effective use, permitted the simultaneous pursuit of more than one offensive strategy, with a likelihood of success and an ability to overcome the defense and resist counter offensives without having to call on reserves from other ‘fronts’. Air power could be applied from the sea as never before, and as part of an effective and well-supported modern combined-arms force.

Text
1 of 1
There were now sufficient aircraft both for a carrier battle and for protecting an amphibious assault, and the fast-carrier task forces, combined with surface escorts, constituted a major operational-level weapon with the necessary tactical cohesion.
Image 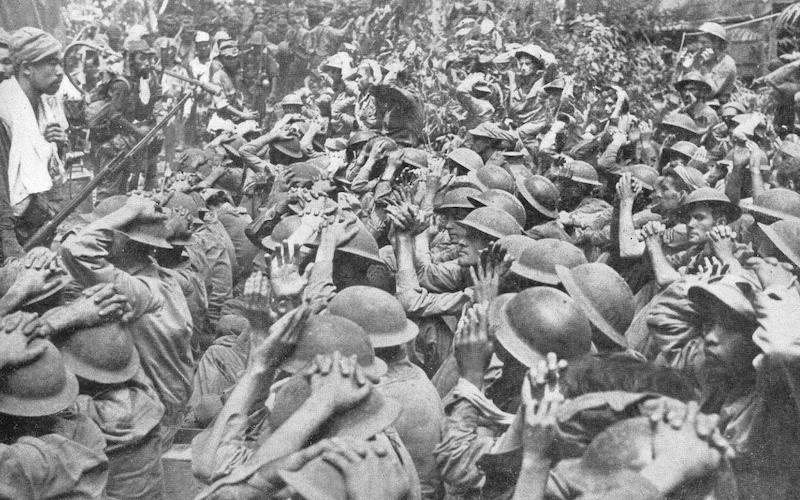 Japanese Invasion of the Philippines

This award was intended not so much for me personally as it is a recognition of the indomitable courage of the gallant army which it was my honor to command. - General Douglas MacArthur, upon receiving the Medal of Honor for his defence of the Philippines. 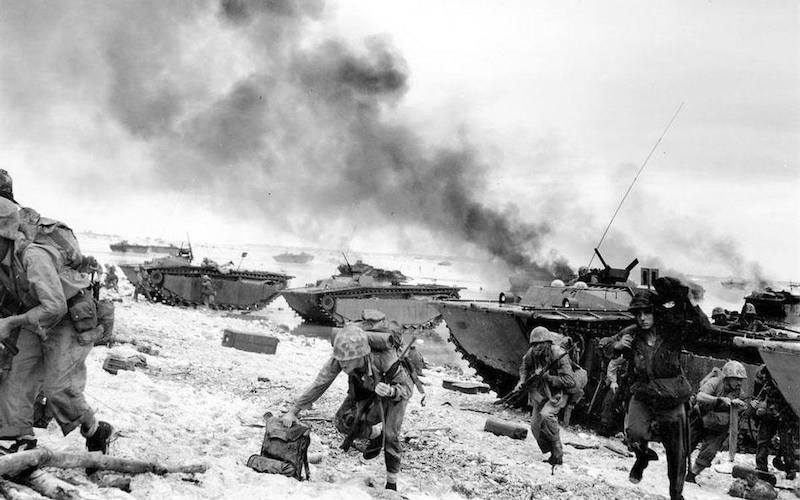 By 1944, after 2 years of Japanese occupation, the Philippines again became a theater of war as American and Filipino forces under the command of Douglas MacArthur staged an amphibious invasion of the island of Leyte. Imperial Japan surrendered after the atomic bombings of Hiroshima and Nagasaki.