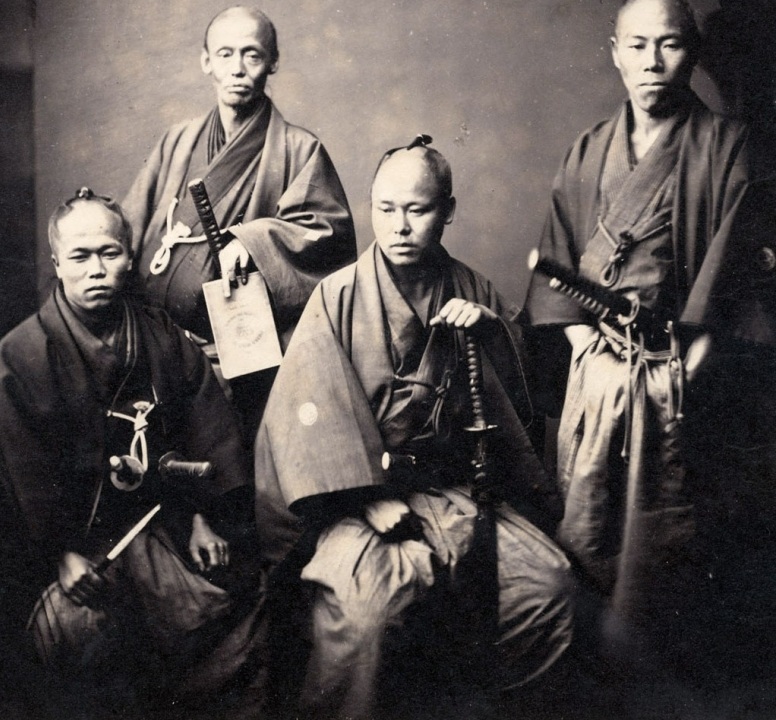 Text
1 of 7
Christianity, brought by the Portuguese, was initially tolerated in Japan. This is remarkable, happening as it did in the Middle Ages. However, Christianity began to be seen as a threat when it was accepted by more and more peasants. Even many daimyo, senior feudal lords, had converted. The Dutch and Portuguese had brought shotguns and cannons with them. These weapons could potentially be used by the masses against the military dictatorship. Thus, the third shogun of the Edo period, Tokugawa Iemitsu, ordered the isolation of Japan.
Image

Text
2 of 7
The Americans tried, through negotiations, to open Japan up to the rest of the world. After repeated refusals, Matthew C. Perry was sent with a fleet by the American president Millard Fillmore, to convince Japan to sign a trade treaty. Perry created a blockade of Japanese ports. The Americans had warships from the industrial age, with coal-fired engines and powerful cannons. The Japanese had swords, arrows, primitive cannons, flints and muskets. Thus, they were forced to yield.
Image 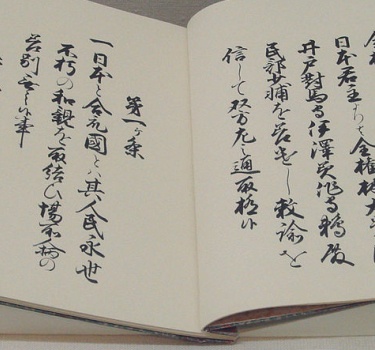 Text
3 of 7
In the face of the American threat, the Japanese signed the Convention of Kanagawa. American vessels received exclusive trade rights, especially for transporting prime materials such as coal. America had the right to keep an ambassador in Japan, in Shimoda. Four years later, another treaty was signed. This was called ‘The Treaty of Amity and Commerce’. It was negotiated by the American diplomat Townsend Harris, and is also known as the ‘Harris treaty’. The deal was very disadvantageous for Japan.
Image 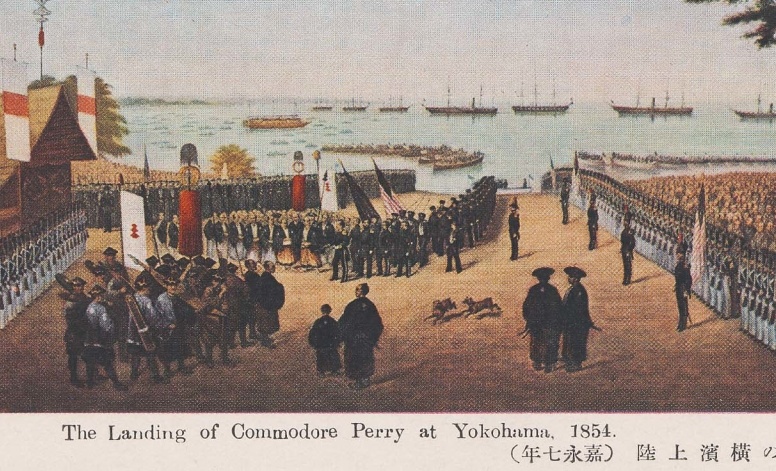 Text
4 of 7
The treaty of amity and commerce stipulated that Japan would open the Kanagawa, Nagasaki, Niigata and Hyogo ports. The Americans had the right to commercial exclusivity in these ports. American citizens were allowed to visit the country and build warehouses on Japanese territory. These foreigners received immunity from Japanese legislation and could not be tried, regardless of the crimes committed. In order to avoid being colonized and having to face even more humiliations, it was clear that Japan must enter the modern world.
Image 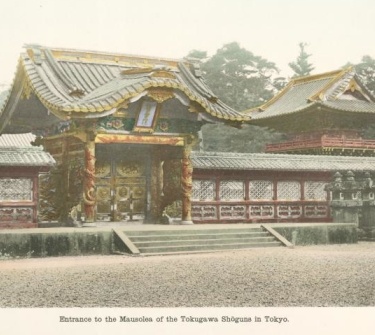 Text
5 of 7
In spite of its self-imposed isolation, Japan developed rapidly. The era of the Tokugawa shogunate was a period of 253 years of peace and economic prosperity. A period of amazing cultural advances followed. Approximately 40% of the population could read and write. Edo, modern-day Tokyo, was becoming the largest city in the world, with over 1 million inhabitants. The next two largest towns, Kyoto and Osaka, each had 400,000 inhabitants. However, most of the population lived in rural areas. Japan was an advanced country, but still anchored in feudalism.
Image

Text
6 of 7
Persecution of Christians began at the beginning of the Edo era. In the end, the Japanese Christians fought back. Led by Amakusa Shiro Tokisada, the rebels tried to overthrow the Tokugawa regime. Civil war followed, known as the Shimabara rebellion. Amakusa was defeated. At least 27,000 Christians were massacred. Foreigners were no longer allowed on Japanese territory. Japanese citizens who left the country risked capital punishment if they dared to return. The only commercial relationship with Europe was with the Dutch, through an artificial island called Dejima, near Nagasaki.
Image 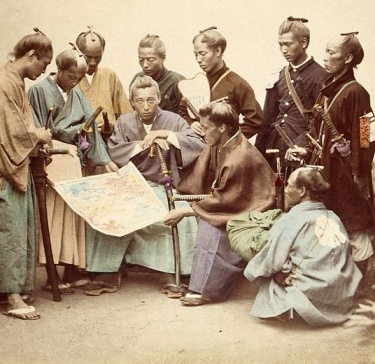 Text
7 of 7
The attempt at sudden modernisation in Japan provoked a civil war, also called ‘The Year of the Dragon War’ or ‘Boshin’. Those loyal to the shogun Tokugawa Yoshinobu wanted to preserve ancient traditions and the class of the samurais. The supporters of Emperor Matsuhito, only 16 years old, wanted to reform the country and avoid colonization. The revolutionaries won. The final resistance of the samurais took place at Shiroyama. There, the last 500 survivors chose to fight with traditional weapons. The moment was artistically interpreted in the film ‘The last Samurai’.
Image

In the space of only three decades, Japan was transformed from a feudal economy to a capitalist, market economy. The speed at which the country was reformed is unprecedented in history. Lacking natural resources and with only 20% arable land, Japan’s perspectives for development were not great. However, this did not hinder the revolutionary process on all sides. In two generations, the Land of the Rising Sun became the main political actor in the Far East. For his merits, emperor Matsuhito was venerated during the Japanese military period as a legendary figure. 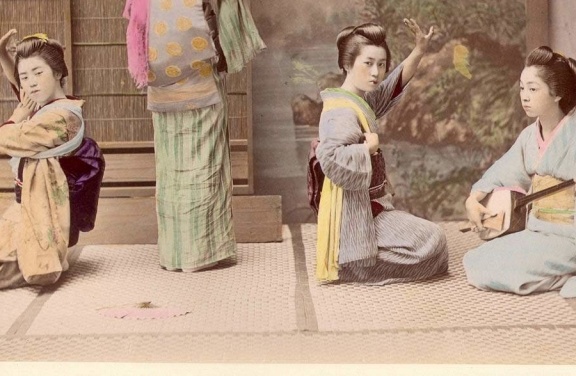 Text
1 of 5
The secret to the success of the modernisation process lay in the will of the whole of Japanese society to work together. The Japanese were determined to maintain their independence at any price. Traditions must be preserved, but any new technology or organizational reform, if it were useful, must be implemented as quickly as possible. Major changes took place in social, military, economic, judicial and educational fields. The population began to dress according to western fashion and to build western-style houses. Even their diet changed, as new types of food were imported.
Image 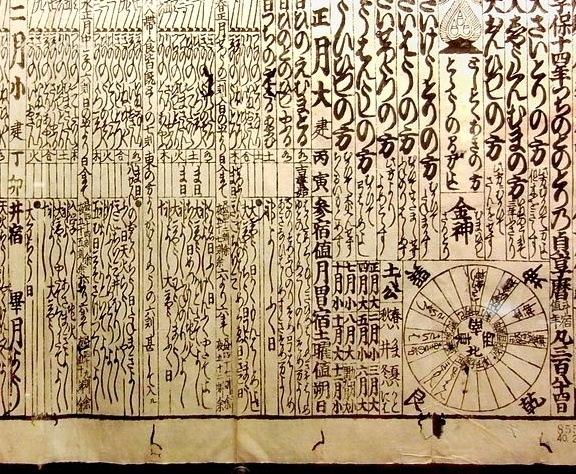 Text
2 of 5
The calendar was changed. Time was calculated according to modern methods. Literacy levels were raised considerably. Four grades of school were made obligatory. The boys’ uniforms were inspired by Prussian military uniforms, the girls’ by the American navy. A Central Bank of Japan was created, to deal with new challenges on the global financial market. However, this could not finance all the massive investments in infrastructure and was forced to borrow from abroad. The principal creditors were the United States of America and Great Britain.
Image 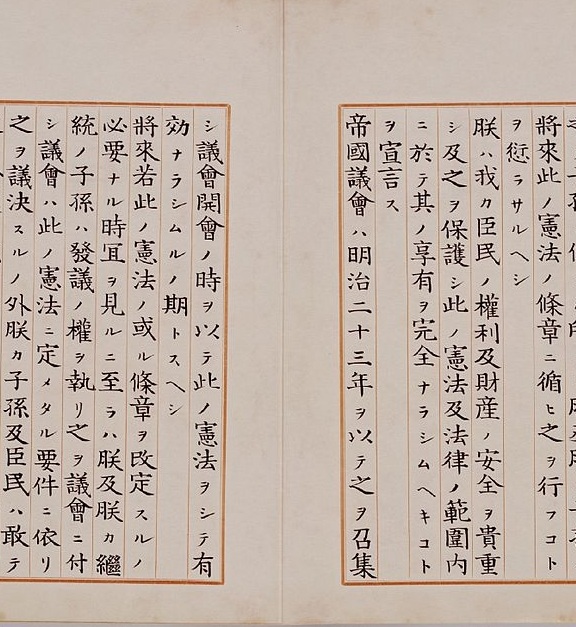 Text
3 of 5
Like any modern state, Japan had a constitution. This was based on the constitution of Germany, a newly-formed country. The entire justice system was changed. For the first time, a civil code was introduced, defending citizens’ rights. Feudalism was abolished, together with all privileges reserved for the nobles and clergy. The emperor had a secondary role, leaving the executive body to govern. The reforms in the justice system also created problems, since many samurais were left without jobs. As a consequence, many ministers of the Meiji period were victims of assassinations.
Image 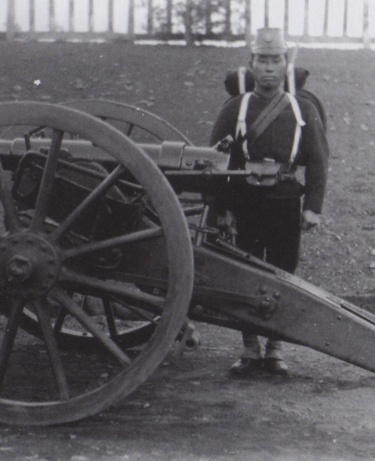 Text
4 of 5
The army was supplied with modern technology. Attempts were made to construct a Japanese war industry. Military grades and organization were copied from western experts, invited especially for consultations. The spirit of the samurais was still present, with officers being educated according to the Bushido code. This would later be seen in the wars that were fought, up until the defeat in the Second World War. Many Japanese were sent to prestigious universities all over the world, in order to come back and help with the reformation of the country. The most advanced methods of medical assistance available at that time were adopted.
Image 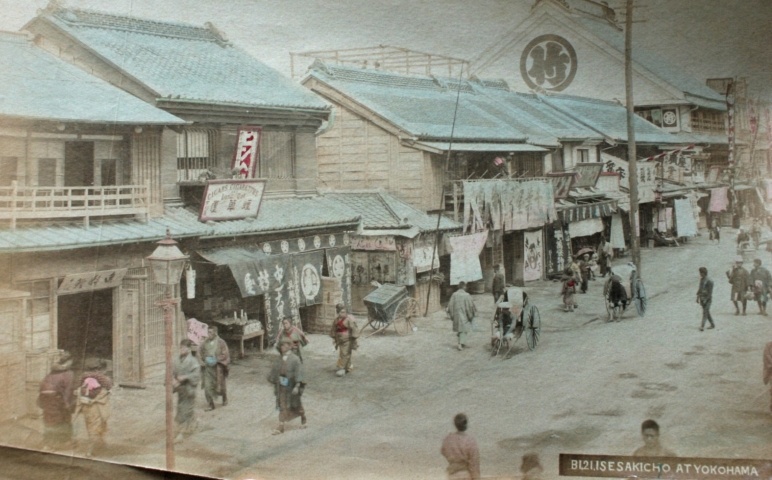 Text
5 of 5
In spite of its remarkable progress, the Japan of the Meiji era could not overcome the major handicap it had, compared to the Great Powers. Urban populations doubled during this period. However, a great number of people still worked in agriculture. Without natural resources, industrial production was modest. Tokyo wanted to enter the ranks of the world powers. With a unique and hard to understand culture, Japan was not even seen as a regional power. However, according to economic statistics from that time, Japan had become the seventh power of the world, overtaking Italy.
Image