Close
In terms of trade, technology, arts, literature, military strategy, administrative organization and techniques of good governance, the process of assimilating and borrowing from China and Korea was of utmost importance for the maturing of the Japanese civilization. These mostly secular variables became interwoven with the religious life of the society to such an extent that the phenomenon of ethnogenesis cannot be understood by treating the factors separately. Incipient Shinto was related to other agricultural and animistic religious manifestations from Asia but later evolved as a completely different religion. Clan chieftains justified their sacred authority by taking the role of intermediaries between the people and the gods. Starting as a wide, unpremeditated range of colorful myths, Shinto was partially reshaped to grant the emperor his sacred nature. Buddhism arrived to enhance ... this absolute authority, offered a prestige that would eventually make the neighboring countries respect and fully recognize Japan as a sovereign entity, and smoothed the road for radical reforms. From a metaphysical perspective, Shinto influenced Buddhism by offering it a more collectivistic trait, while Buddhism came with a complex system of ethics that was completely lacking in the Shinto teleology. The religious syncretism encouraged a remarkable social cohesion which was behind the success of the imperial system, but it also heavily inspired and transformed all the philosophical and artistic forms of expression from the archipelago. Japan managed to adapt the foreign components to its own particular needs. At the end of this procedure, the unique and authentic character of the Country of the Rising Sun emerged.read more
The influence of religion and foreign contacts on the statecraft and national identity of ancient Japan have been analyzed by numerous scholars. Probably the most important ones are Okazaki Takashi, Matsumae Takashi, Sonoda Koyu and Delmer M. Brown. Their contributions have stirred fascinating debates about the circular relationship between material and spiritual elements in history. Did archaic animistic beliefs develop into a national religion thanks to economic prosperity and advanced political strategies, or were economic prosperity and the centralization of an efficient state made possible by the very strong persuasion of pre-existing common spiritual values? Or was the result just a compromise between two complementary phenomena? Do contacts with more developed civilizations encourage the creation of a unique culture or inhibit it because of the imitation?

Text
1 of 7
Since the very beginning, the prehistoric culture of the Japanese archipelago was heavily influenced by the continent of Asia. First of all, it’s undeniable that the Incipient Jomon hunter-gatherers arrived in Japan by boat and via land bridges that later disappeared. Second of all, agriculture and iron tools were introduced from China or Korea or both. As in many other ancient societies, the agricultural revolution radically changed the lifestyle of the people. The hunter-gatherers were slowly replaced by a fully sedentary agricultural culture, the Yayoi. In time, the villages grew into tribe federations and from there into small kingdoms.
Image 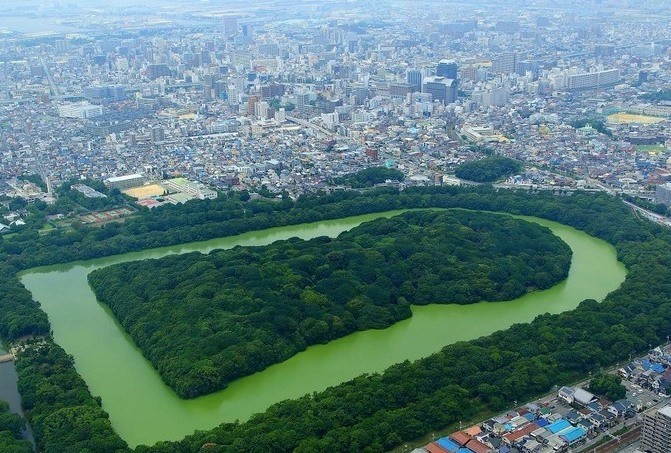 Text
2 of 7
Starting from the Kofun era, Korea was divided into three kingdoms: Koguryo, Silla and Paekche. Those ancient states worked as intermediaries for the cultural, technological and economic transmission from China to Japan. New weapons, military tactics, advanced carpeting techniques and Buddhism were introduced from there. Korea was also the prime source for imports of iron ingots. During the Asuka and Nara periods, Japan grew into a fully fledged civilization based on the model of the Chinese Tang dynasty. Inspired by the economic and cultural successes of the glorious Tang, the Japanese state was centralized under the absolute authority of the emperor, a reign also legitimized by Shinto and Buddhism.
Image 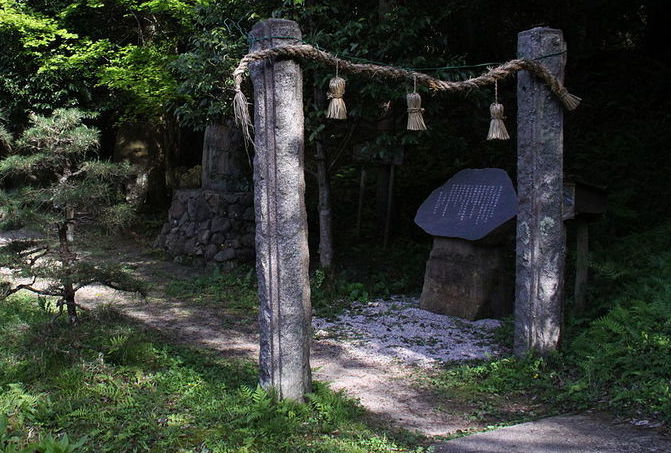 Text
3 of 7
The damnation or the salvation of the soul are abstract ideas completely unknown to Shinto. Heaven and Hell were also much later conceptions introduced by Buddhism. Shintoism is not a religion built around the individual. The individual has no moral responsibility in the face of a powerful god or a sacred ethical guideline. The archaic Jomon could bring misfortune to the community as a whole if he undertook impure actions. He had the duty to participate in magical rites in order to purge all that was filthy. The earliest forms of Shinto offer a plausible explanation for how the general mentality of the Japanese civilization advanced through the centuries and why the current Japanese society is based on a collectivist unifying philosophy.
Image

Text
4 of 7
Foreign contacts also influenced the ancient Japanese perspective. Although Shinto is now an original and unique religion, in its first phases of development countless myths were borrowed from the Asian continent. Actually, Shinto is a rich source of folk tales and legends, later inspiring works of literature of universal value, simply because the founding pillars were based on varied cultural perspectives, carved by contrasting life experiences. Moreover, the later introduction of Buddhism altered the way Shinto was expressed in arts, added new stories to the traditional narrative, offered ethical perspectives and even adapted some of the animistic rituals, transforming them into more formal and complex ceremonies.
Image 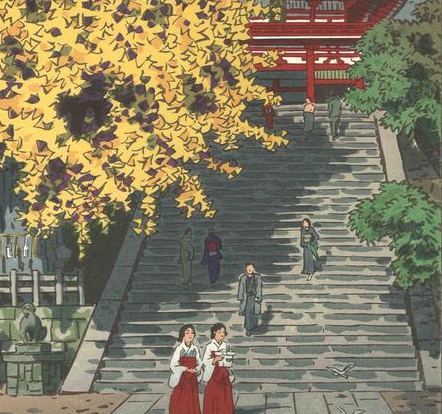 Text
5 of 7
Shinto as a state religion was not just a manipulated fraud work of fiction. In order to arrange a compelling force of political legitimization, the ancient scholars tried to choose and be inspired by the most popular and enduring myths from folklore. Even the most enlightened intellectuals of that era were very religious people and their work represented a middle ground between their own mystical beliefs and secular political necessity. By the virtue of this spiritual and material link, Shinto and the ancient Japanese state reached maturity at the same time and were both shaped by each other.
Image 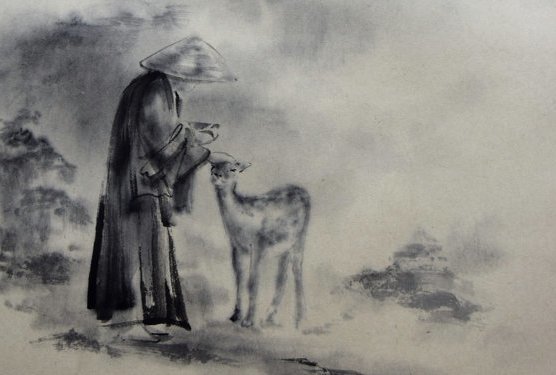 Text
6 of 7
While early Shinto progressed spontaneously from the bottom to the top of the pyramid, Buddhism was, first and foremost, used as a political tool. Initially introduced from Korea, the foreign faith was not well received by the native clans whose authority relied on the worship of traditional deities. The numerous aristocrats originating from Korea and China organized themselves around the Soga clan, promoting Buddhism not as a spiritual teaching, but more as a political ideology. Only after the downfall of the Soga family did the Japanese emperors fully recognize Buddhism as a state religion, investing large sums of money in order to consolidate it. Yet, until the late Nara jidai, with a few enlightened exceptions, most of the Japanese understood the Buddhist dogma in a very shallow way, praying for a plentiful harvest or for good health.
Image

Text
7 of 7
The reasons behind the adoption of Buddhism were numerous. The Yamato kings wanted to be recognized as the equals of Korean and Chinese sovereigns, and a common religion could have facilitated a better diplomatic dialogue. Trade relations were also facilitated by shared spiritual values. Furthermore, the Japanese started to manifest geopolitical ambitions in the Korean Peninsula and they needed allies to accomplish their high goal. It is not by chance that Paekche, Japan’s most reliable ally, was the one who presented this faith to the Yamato rulers. As China was reunified under the Sui and Tang dynasties, the Japanese elite understood that great political and economic reforms could be faster implemented with the help of a new religious ideology.
Image

Most scholars agree that the Yellow River and the Yangtze River in China represent the cradle of civilization in the Far East. The first agricultural society clearly appeared there, with recent research dating it as early as 5,000 BC. According to traditional historiography, Xia was the first Chinese dynasty that emerged in 2,000 BC. The following Shang dynasty was one of the most advanced kingdoms in the world at that time, using bronze weapons and already adopting early Chinese characters in 1,600 BC. The Zhou dynasty entered the Iron Age one thousands years before our era, and the Qin dynasty materialized into the first Chinese empire in 220 BC. It is inevitable that such enormous cultural expansion also had a profound impact on the ancient societies of Korea and Japan. 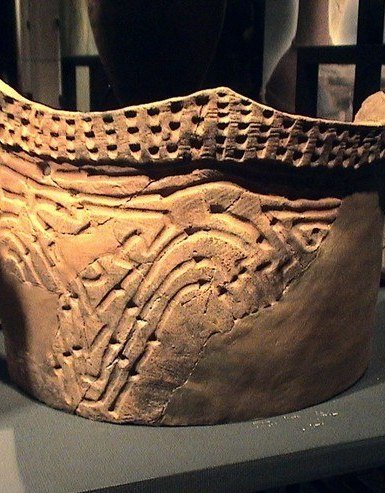 Text
1 of 5
Until recently it was believed that Japan lost all contact with the continent of Asia when the glaciers finally melted in 14,000 BC. Archeological sites point to a scant connection between the Early Jomon of Japan from northern Kyushu and the Jeulmun hunter-gatherers from Korea. Pottery discovered in Busan had similar traits with the Jomon, suggesting that the famous Sobata pottery style of prehistoric Japan was inspired by primitive ceramics from Korea.
Image 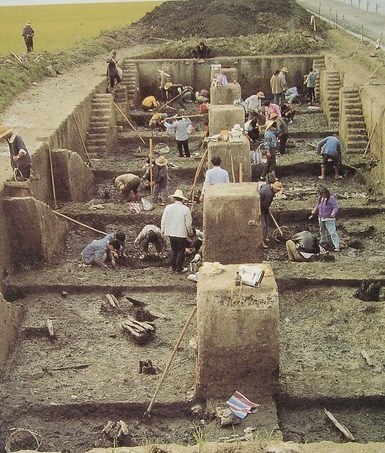 Text
2 of 5
The prehistory of Japan was again marked by numerous migrations in the Late Jomon and Early Yayoi. Plant manipulation already existed but rice cultivation was introduced by those migrations. Although no one denies that agriculture spread from the Yangtze River to Korea and Japan, the exact route and date of arrival is very controverted. Scientists debate around three theories that try to explain the point of origin. All of them are supported by solid evidence and thorough analysis.
Image 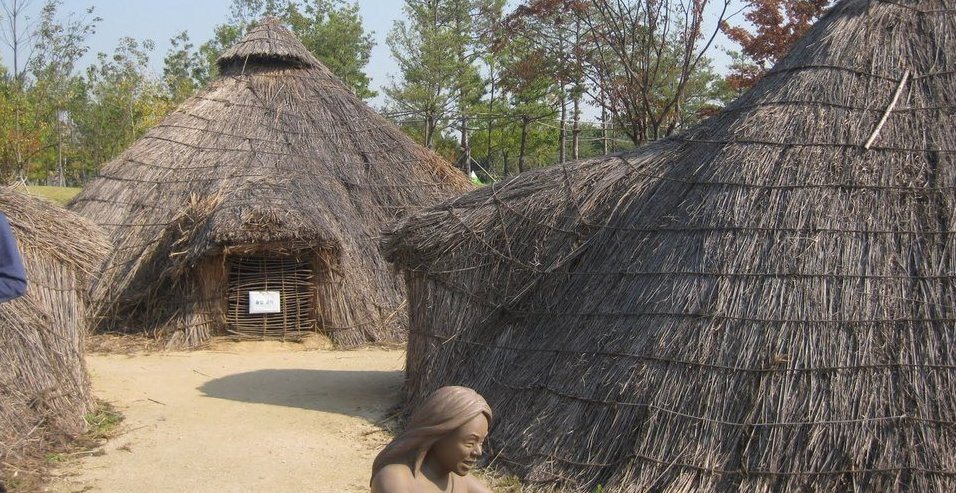 Text
3 of 5
Developed Jomon-style ceramics have been unearthed in various parts of Korea but there is no evidence of pottery from Korea in the Middle and Late Jomon. This could mean that Middle and Late Jomon culture was isolated and developed without any influence, but that it also exported technologies to the Jeulmun culture. The transmission of technology was possible only because the southern part of the Korean Peninsula was very close to Northern Kyushu. Communication was limited only to the tribes from those areas.
Image 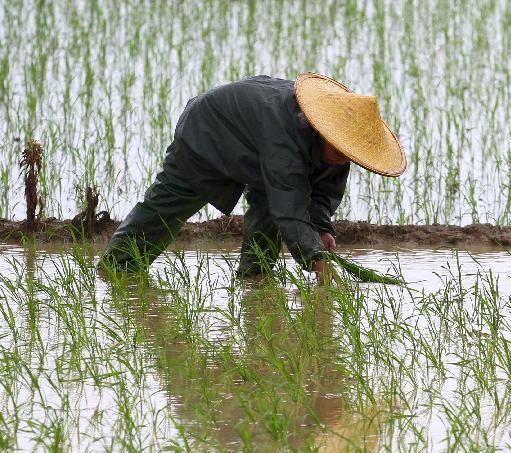 Text
4 of 5
One possible route of migration could have been from China to the Korean Peninsula and then centuries later to the Japanese archipelago. In this scenario, the migrations played a vital role in the rise of the Yayoi. Archaeological artifacts from northern Kyushu support this claim. Another hypothesis states the contemporary adoption of agriculture in Korea and Japan from the Yangtze River, meaning that the cultures of Korea and Japan reached a relatively equal stage of development. Recent rice DNA results and carbon dating reinforce the second theory. An additional possibility is represented by the transmission of rice cultivation from East China to Japan via the Ryukyu islands. Accentuated similarities between Early Yayoi skeletons and the ones from Jiangsu province of China make this idea plausible.
Image 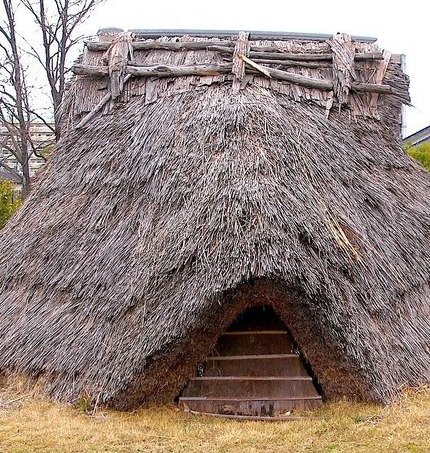 Text
5 of 5
In Okazaki Takashi’s opinion, the most probable ancient route of technology transfer was from China to Korea, and then later to Japan. Recent studies point out that agricultural societies appeared in the Korean Peninsula in 1,000 BC, before the rise of the Yayoi. No Chinese stone and bronze tools have been found from the Early stage of Yayoi. Instead, many Korean tools were similar to the contemporary culture from Japan. Maybe the most important discovery was made at the Itazuke site from northern Kyushu, a village where the Late Jomon hunter-gatherers lived alongside Early Yayoi settlers. Their tools and weapons had similar traits with the ones found in Korea.
Image