Close
During the Great War a series of campaigns were fought in Africa for control of the German colonies in the continent. By the end of the war the German colonies of Kameroon, Togoland, German East Africa and German South West Africa were captured by the Entente. After the war Germany lost its colonial empire.
During the Great War the Central Powers instigated local rebellions against French and British rule in North Africa. The European powers clashed directly in the Entente campaigns against German colonies such as Kamerun (Cameroon), Togoland, German South West Africa and German East Africa. By the end of the war the Entente powers managed to defeat both the local and German forces. The war marked the end of German colonialism in Africa. 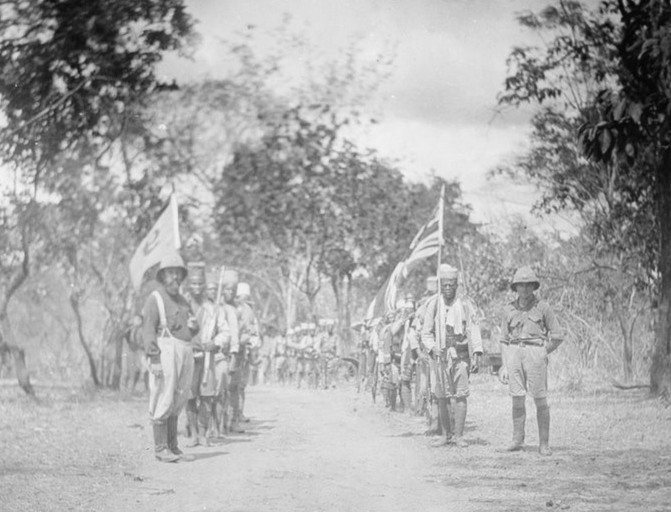 Text
1 of 4
‘Think of lying on the ground where the hot sun is beating directly on your backs; think of yourself buried in a hole with only your head and hands outside, holding a gun. Imagine yourself facing this situation for several days, no food, no water, yet you don’t feel hungry; only death smelling all over the place. Listen to the sound of exploding bombs and machine guns, smoke all over and the vegetation burnt and of course deforested. Look at your relatives getting killed, crying and finally dead.’ This was how Fololiyani Longwe of the King’s African Rifles recalled his First World War service. Longwe served because Malawi, then Nyasaland, was part of the British Empire. His memories were not very different from those of veterans of the war in Flanders and France. And yet one title used for the war as it was being waged was the Great European War.
Image 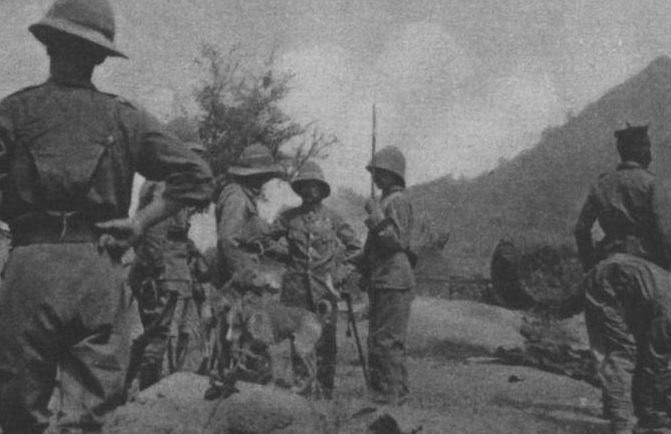 Text
2 of 4
The British decision at the outset of the war, that the objectives of operations outside Europe were naval, created - unbeknown to them - an almost perfect symmetry between their objectives and the Germans’. Precisely because of British maritime supremacy, the Germans had little intention of defending the coast, and planned instead to withdraw inland so as to use the interior in order to prolong their resistance. Thus the British secured several quick successes but were then baffled as to why the fighting continued. The mutual incomprehension prevailed throughout the war.
Image 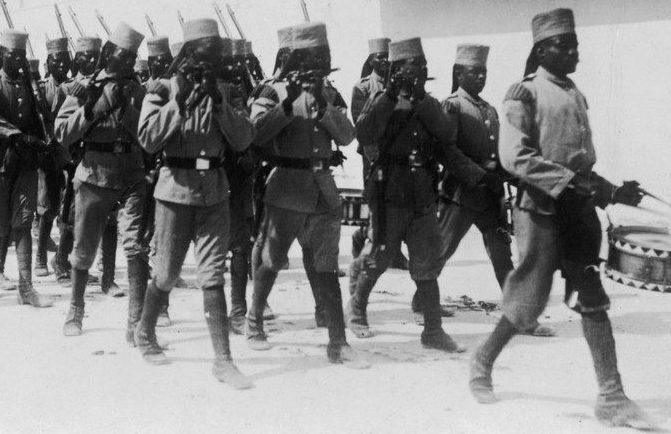 Text
3 of 4
According to some views after the war ended, the war was an unnecessary conflict waged between states whose similarities were more marked than their differences - a sort of European civil war. It has been said, moreover, that if the Great European War was truly a global war, it became so only after the United States entered it in April 1917. Fololiyani Longwe’s testimony corrects such arrogant uses of hindsight. He was one of over 2 million Africans who served in the war as soldiers and laborers: 10 percent of them died, and among the laborers the rate may have reached 20 percent. These were casualty rates comparable with those on the Western Front.
Image 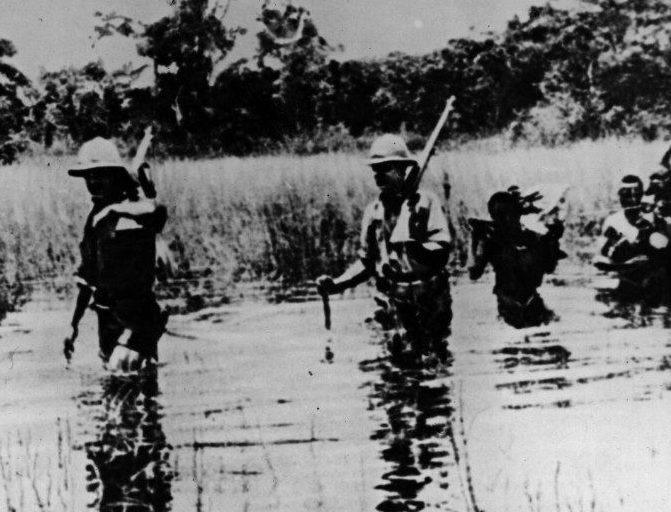 Text
4 of 4
As much from its outset as beyond its formal conclusion, the First World War was far more than just a European conflict. In August 1914, British, French, Belgian and German belligerence embraced the entire continent of Africa with the exception of Liberia, Ethiopia, and the relatively smaller colonies of Spain, Italy, and Portugal. Not even these would remain exempt from the war, at least in its indirect forms.
Image

Germany had had to become an empire itself, the Second Reich, proclaimed in the Hall of Mirrors at Versailles in January 1871, before it could join Europe's great powers in the competition for empire. Their extensive conquests left the new state few pickings. Between 1884 and 1914, they had established commercial enclaves in Cameroon, Togo, and South-West Africa (Namibia) on the west coast, and what is now Tanzania on the east coast, which the imperial government had then consolidated. 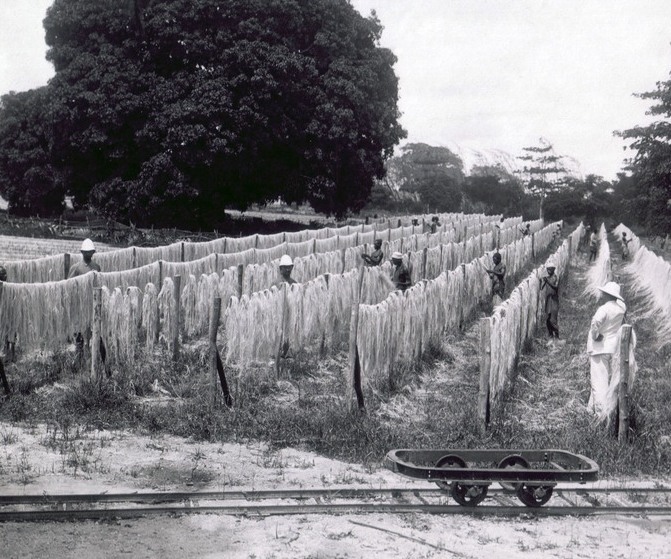 Text
1 of 3
Heinrich von Treitschke, the ideologist of German nationalism, announced that ‘colonization was a matter of life and death’. Even so, there was little popular enthusiasm for the acquisition of colonies, perhaps because the only areas still available for exploitation were in the less favored parts of Africa. It was German traders who supplied the impulse to enter the continent.
Image 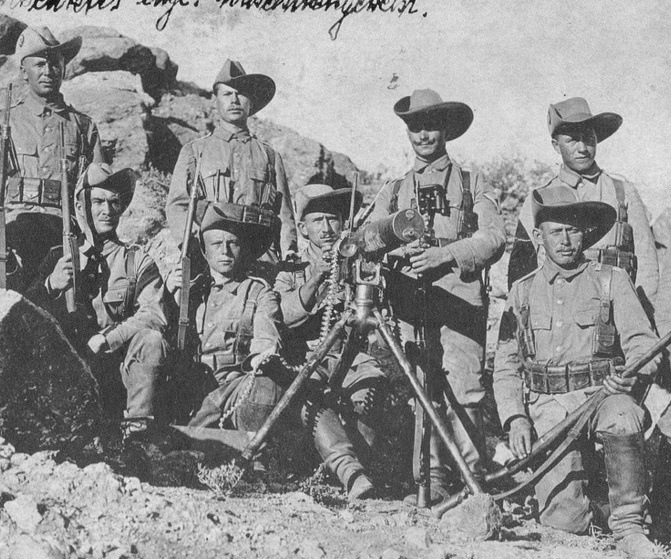 Text
2 of 3
Genocide and famine were both deployed against the Herero in South-West Africa and the Maji-Maji in East Africa. Thereafter, however, German colonial administration became more liberal. Military responsibilities were circumscribed, commercial development promoted, and settlement doubled. As a result, the German colonial forces, the Schutztruppe, could draw in more whites: from 1913 conscripts were allowed to complete their reserve service overseas rather than remain liable for recall to Germany.
Image

Text
3 of 3
The settlers themselves became increasingly reluctant to meet the costs of an inflated military establishment, and order on a daily basis was handed over to an expanded police force. Admittedly their armament was similar to that of the Schutztruppe, and they could be and were incorporated with it when war broke out.
Image